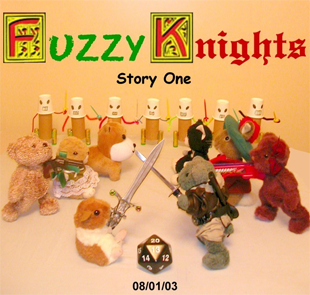 The toys have come to life. And they play Tabletop Games.

Fuzzy Knights is the work of Noah J.D. Chinn, who made the initial strips as a one-shot homage to Knights of the Dinner Table, using stuffed animals, miniature paper props and a digital camera because "it was all I had". The strips ended up becoming very popular (praised by the late Gary Gygax, even) and Kenzer and Company, the KOTD publisher, made a deal to host the strip officially, and later published two dead tree volumes and a Fuzzy Knights RPG book.

Over time the concept evolved into a whole fuzzy underground keeping up The Masquerade, with rules, a culture and villians of its own.. The focus remains the core group of four: