Literature / The Cat on the Dovrefell 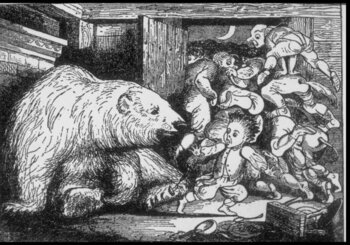 Engraving by George W. Dasent published in Tales from the Norse
Advertisement:

The Cat on the Dovrefell is a Norwegian Fairy Tale collected by Peter Christen Asbjørnsen and Jorgen Moe.

A man was bringing a trained bear to the king, but had to stop at Dovrefell. The people there told him they could not offer him a place to stay, because trolls drove them out every Christmas time. The man said he would stay just the same, so they let him and left all sorts of food for the trolls' feast.

The trolls came. One of them, calling it "Pussy", began to bait the bear with a sausage, and it turned on them and chased them out.

The next year, a troll asked them if they still had that cat. The man told them that they did, and she had had kittens, six of them, all fiercer than she was. After that, the trolls troubled that household no more.

Compare the trolls to those in Tatterhood.

Girl Genius co-creator Kaja Foglio retold it in webcomic from: ''The Cat On The Dovrefjell''