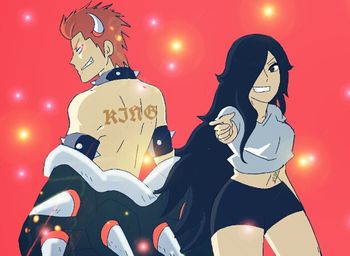 Gangster Mama is a Fan Webcomic based on the Super Mario Bros. franchise. Just as the series main antagonist Bowser is about to defeat Mario once and for all, a mysterious tough as nails young woman inadvertently saves the red plumber's life by kicking the Thwomp that would have ended him out of the way. However, she's not here to oppose the koopa king. Instead, she arrives on the scene to tell Bowser to take responsibility for his actions!

As it turns out, this young woman (named Jasmine) is carrying Bowser's future son inside her and threatens to go to the authorities and tell them that he (unknowingly) had sex with a minor unless he either pays child support or helps raise the new addition to the koopa family by marrying Jasmine!

Too proud to pay child support, Bowser reluctantly takes in Jasmine on two conditions. One, she takes care of the castle on a daily basis and two, receives a genuine kiss from her baby daddy within 30 days or else be exiled from the castle! Complicating this of course is Bowser's refusal towards Jasmine's advances and the arrival of his other children, the Koopalings!

If the above didn't tip you off, Gangster Mama is rated NSFW for explicit language and suggestive content!

Created by Tapastic user Shy Girl. Gangster Mama can be viewed at [1]