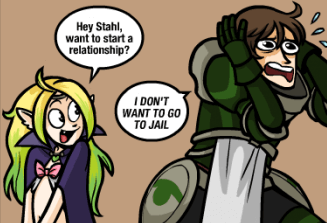 This trope is when an adult character struggles with romantic and/or sexual feelings for a teenager below the legal age of consent. Social norms portray relationships between adults and teens as inherently abusive and wrong, yet many adult characters find teens attractive (or just one in particular), making them Forbidden Fruit. Thus, the opportunity of sex or a relationship with an underage partner presents a moral conundrum and character-defining moment.

In Real Life, Age of Consent laws define when sex or relationships between adults and older teenagers are legal, and the adult can be prosecuted for it when they aren't. Hollywood Law often comes into play with this trope, because most of the world makes some allowance for such relationships even if they're socially frowned upon.note Admittedly, there's a world of difference between a 19-year-old dating a 16-year-old, and an old pervert hitting on someone young enough to be their child, hence why "Romeo & Juliet" laws exist when the partners are just a few years apart but on opposite sides of the age of consent. Because California is one of the few exceptions where the younger partner MUST be 18 with no close-in-age exceptions, many Hollywood works incorrectly assume this is the case everywhere.

Legal aspects aside, the taboo can have a number of impacts on the story and characterization. A character may be attracted to a teenager, but avoid pursuing the relationship due to the taboo (often a way to show that they're a decent person or Chivalrous Pervert). They might pursue the relationship despite the taboo, and receive legal or social consequences for it. Other times, they may simply wait until their crush is of legal age. Some scenarios make the older partner sympathetic or even a victim by having teen initiate the relationship, often by lying about their age. Other scenarios where the older partner willingly pursues teenage partners tend to portray older one as an immature, shallow pervert exploiting their young lover's naivete.

This trope often involves an adult man and an underage girl, but not always. Gender-flipped examples are more likely to be Played for Laughs or for Fanservice, while same-gender examples often fall into Lover and Beloved and tend to be the most scandalized due what so many already believe about gay people.

Often overlaps with Age-Gap Romance and Unequal Pairing. May overlap with Joshikousei and Catholic School Girls Rule, other tropes about fetishizing high school girls. Compare Wife Husbandry and Mal Mariée, a Medieval analogue to this trope with some different connotations. See also Old Man Marrying a Child— the age difference with this trope is less extreme, often 10-15 years, but the squick factor is similar.