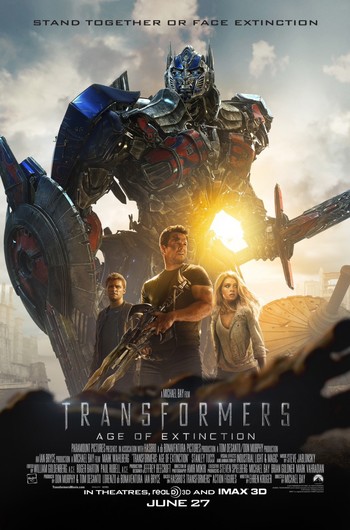 The rules have changed.
Cade: That missile I took out, it nearly hit your power core.
Optimus Prime: We call it our spark. It contains our life essence and memories.
Cade: Yeah? We call that a soul.
Advertisement:

The fourth film in the Transformers Film Series, directed by Michael Bay and released on June 27th, 2014. The film is intended to be the start of a new trilogy with a new Story Arc to it.

Five years after the events of Transformers: Dark of the Moon, most of the Decepticons seem to have left Earth and the Autobots were driven into hiding by anti-Transformer sentiment and unauthorized paramilitary action. Life has, more or less, returned to the way it was before the Cybertronians battled on their planet. Mark Wahlberg plays an inventor named Cade Yeager who happens upon an old, dilapidated semi-truck that turns out to be Optimus Prime. A new human conspiracy unfolds, and the arrival of a Transformer mercenary named Lockdown indicates something ancient and malevolent is setting its sights on Earth. With the help of their new human allies, Optimus has to gather the Autobots to save humanity even as they are being hunted on multiple fronts.

Despite harsh reviews from critics, the film became the first of 2014 to open at $100 million (although it's been disputed), and the only film in 2014 to gross over $1 billion, significantly due to superb ticket sales in China. At the time of its release, Age of Extinction was the 10th highest grossing film of all time.

The movie has a tie-in game, Transformers: Rise of the Dark Spark, which serves as an Intercontinuity Crossover with the War for Cybertron universe.

Check out the Super Bowl spot

and the final trailer.

These aren't tropes. This is human extinction:

"There are mysteries to the universe we were never meant to solve. But who we are and why we are here are not among them. Those answers, we carry inside. I am Optimus Prime, and this message is to my Creators: leave planet Earth alone...'cause I'm coming...for you."

Based off of Bumblebees' design, Stinger is an Earth-Made Transformer that is toted as being better than Bumblebee in every conceivable way (aside from the simple fact that it isn't even remotely alive)

Based off of Bumblebees' design, Stinger is an Earth-Made Transformer that is toted as being better than Bumblebee in every conceivable way (aside from the simple fact that it isn't even remotely alive)