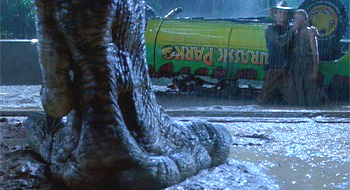 A scary character is approaching, and the camera focuses on his/her foot crushing something, or just emphasizes the frightfulness with a closeup of the character's feet/boots, which may be adorned with Spikes of Doom or the like.

Differs from Feet-First Introduction in that it isn't necessarily the first appearance of the character. Compare Giant Foot of Stomping and Trampled Underfoot.