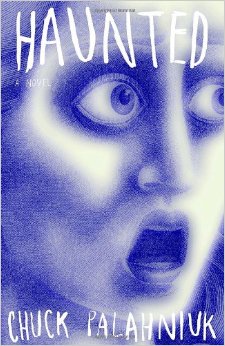 Haunted is a unique collection of short stories by Chuck Palahniuk. Seventeen unusual people, all of whom happen to be writers, sign up to attend a three-month writer's workshop courtesy of the mysterious Mr. Whittier. Acting on assumption necessities of toothpaste and toilet roll will be available, each writer brings a suitcase each of personal items.

Given the ultimatum that leaving is not an option until the three months are up, the writers quickly learn that there's no escape and no help coming; under this knowledge, they instead concoct the ruse that they're all martyrs and victims trapped by Mr. Whittier, and begin to destroy themselves (both mentally and physically) between telling highly dramatized versions of their own life stories. What results is a deconstruction of reality TV shows, and a whole lot of squick.

While it never becomes clear how much of their backstories are true or made up, expect most of them to have Body Horror, Nausea Fuel, Nightmare Fuel and/or Rape as Drama. It should also be noted that, whilst some of the tales seem downright impossible, quite a few are very closely based on real events.

", was published in Playboy magazine well before the book came out proper presumably as a warning. Palahniuk did readings of it during his worldwide book tour for diary. Over 80 people fainted.

This book features examples of: