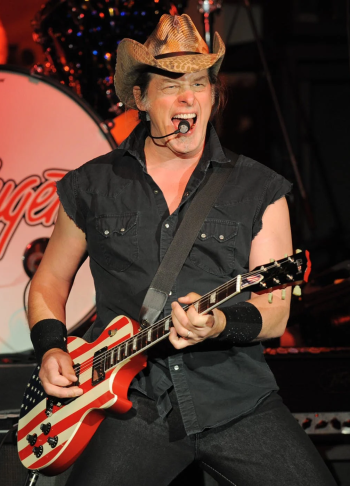 "Hey, what's up? If any of you don't got a gun, a knife, handkerchief, and a Chap-Stick, get the (guitar riff) outta here!"
— Ted Nugent, from the Aqua Teen Hunger Force episode "Gee Whiz"
Advertisement:

Theodore Anthony Nugent (born December 13, 1948) is a heavy metal rock guitarist and vocalist from Detroit, Michigan who has sold over 14 million albums in the United States and 31 million worldwide. His best known song is "Cat Scratch Fever." Nugent has been touring annually since 1967, and chances are it will take death to stop him.

He was first in a band called the Amboy Dukes, which had a hit with "Journey to the Center of the Mind", before starting a successful solo career. In the 1970s, he recorded three multi-platinum albums: Ted Nugent, Free-For-All, and Cat Scratch Fever. He later joined the supergroup Damn Yankees before going solo again.