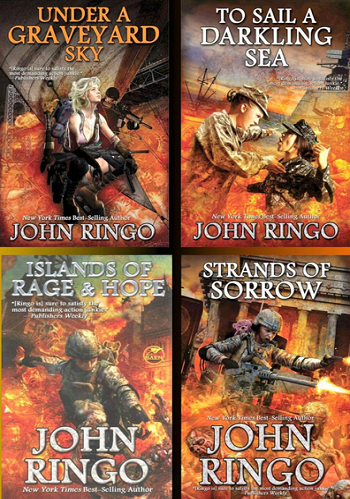 The first four volumes.
Steve Smith: Adventure is something that happened to someone else, preferably a long way away and a long time ago. When it happens it’s horror, terror or tragedy.
Faith Smith: Someday this will be an adventure.
Advertisement:

In various places online and off, John Ringo has mentioned that he didn't care much for most Zombie Apocalypse fiction. So what does he do? He writes his own.

Black Tide Rising focuses on a Crazy-Prepared family surviving the initial outbreak and taking refuge on a small boat in the Northern Atlantic. After a few months, they start scavenging other vessels, clearing them of zombies and rescuing survivors, finally establishing a small, well, nation of its own, charter and all.

A graphic novel titled "Black Tide Rising" is currently in production (having achieved crowdfunding in October 2020), written by Chuck Dixon, and adapted from the first book in the series, with elements added from the anthology stories and novels written by Massa.

Not to be confused with Dark Tide or The Black Tides Of Heaven.

...as long as humans maintain boring, humdrum civilization, post-apocalyptic or apocalyptic fiction will remain popular. Because it is who we are in our hearts.
At our core, we are all savages.
—John Ringo