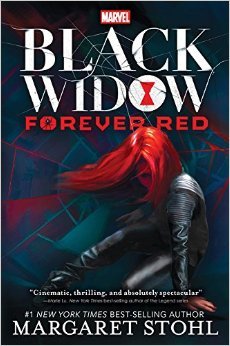 A Young Adult novel series by Margaret Stohl focusing on the exploits of S.H.I.E.L.D. Agent Natasha Romanov in the aftermath of the Battle of New York. However the second book reveals that the series is not set in the Marvel Cinematic Universe despite Forever Red's implications to the contrary (Captain Marvel is referenced despite the fact that she has yet to be introduced to the MCU, among other details). The novels instead appear to be set in a universe that combines elements of the MCU with the main comics universe.

The first book, Forever Red, focuses on Natasha's attempt to find and kill her Evil Mentor Ivan Somodorov, a teenage girl named Ava who Natasha had rescued from Ivan's clutches 8 years ago, and Ordinary High-School Student Alex Manor, whom Ava can see in her dreams for some reason.

Agent Romanov believed that Ivan was dead after the S.H.I.E.L.D. raid on his Supervillain Lair in which she rescued Ava, but recent kidnappings suggest that Ivan is Not Quite Dead. Realizing that Ava plays a key role in Ivan's Evil Plan, Natasha and Ava, with help from Alex must track down and stop the man who has caused so much suffering and torment in their lives.