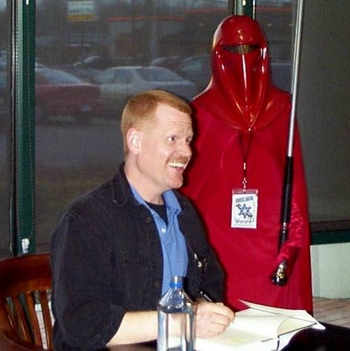 Matthew Woodring Stover (1964- ) is the author of The Acts of Caine series, the Barra And Co bronze age fantasy books and several Star Wars Legends novels, including the novelization of Revenge of the Sith (which is commonly held to be as good as if not better than the actual movie), Shatterpoint, New Jedi Order: Traitor, and Luke Skywalker and the Shadows of Mindor.
Advertisement:

He's a rather dark writer who enjoys grinding his characters down to see what's underneath, forcing them into incredibly vital situations when they're not at their best, and making them second-guess themselves and everything that they thought they knew. He also really likes putting a philosophical touch to the narrative, and seems to like getting meta about storytelling itself. For all that, his novels aren't without some trace of hope and light, although the surviving heroes are always incredibly weary by the time they're over.

No relation to Matt Stover

The Acts of Caine