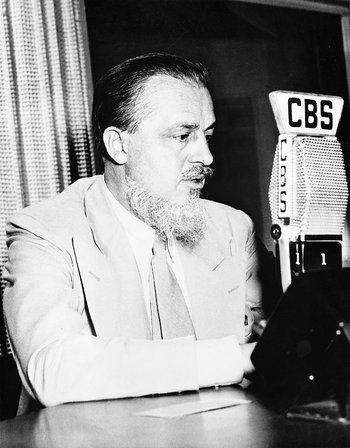 Rex Todhunter Stout (December 1, 1886 – October 27, 1975) was an American author best known for his Mystery Fiction, especially the popular and influential Nero Wolfe series. Stout got his start writing for magazines shortly before the start of World War I. In his early days, he wrote in a variety of genres, from romance to adventure to poetry, but it was in the pulps where he had his greatest early success, and, by the late 1930s, he turned his attention almost entirely to mysteries, and after 1940, only wrote Nero Wolfe stories.

Stout was a generally left-leaning, pro-labor liberal who was not shy about including politics in his work. His 1934 novel, The President Vanishes was published anonymously, in part because of its extremely critical view of the Fascist movement. (It was republished under his name after the start of World War II made that view a bit less controversial.) Despite the fact that the book was also critical of communists, it caused some people to accuse him of being a communist supporter. In the 1960s, he published a Nero Wolfe mystery, The Doorbell Rang, in which Wolfe tangles with the FBI and its notorious director J. Edgar Hoover. The book caused Hoover to put Stout on his enemies list. Stout was also an active supporter of the American Civil Liberties Union. However, his hawkish views on the Vietnam War put him at odds with many on the left.

Stout also challenged gender stereotypes by introducing one of the first professional female private detectives, Theodolinda "Dol" Bonner. Bonner was originally the star of her own stories, but once Stout switched to focus on Nero Wolfe exclusively, she became a recurring character in that series.

Stout was named a Grandmaster by the Mystery Writers of America in 1959, and was inducted into the New York State Writers Hall of Fame in 2014.