Literature / Blood of the Zombies 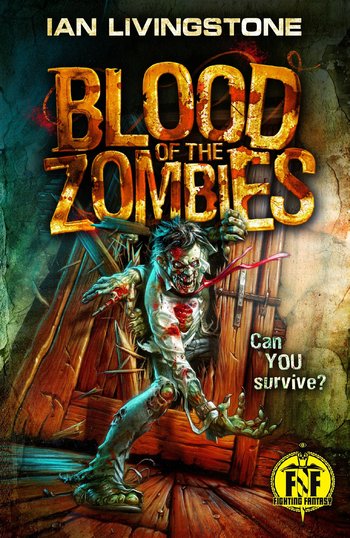 Written by Ian Livingstone in late-2012 to celebrate the 30th Anniversary Milestone of the Cult-Favorite Gamebooks franchise Fighting Fantasy, Blood of the Zombies is a spiritual successor to House of Hell written by Fighting Fantasy co-creator and best-friend Steve Jackson in 1984. Received a simultaneous iOS adptation by the Australian Mobile Game Company, Tin Man Games.

And just like House of Hell, it is set on Modern Day Earth rather than Titan, starring you as an Everyman hero.

You are a mythology major of Bolingbroke College travelling across Europe, writing a thesis on legendary monsters. Having no luck in finding an hint of even Dracula in Transylvania, you happened upon a bar in a dreary little village where you made the mistake of sharing your story with two shady men.

Before you can say "snap crackle and pop" you are kidnapped and thrown into the dungeons of Goraya Castle, the home of Mad Scientist eurotrash psycho Gingrich Yurr, awaiting transformation into a zombie to join his growing legion of the undead.

Not if you have anything to say about it!! Strangling your captor unconscious, you now must escape Goraya Castle and slay each and every last ghoul shambling within; for if you leave even ONE alive, a tide of moaning zombies will consume the world.

And do take care to not get any of their blood into your wounds...

Blood of the Zombies provides examples of: