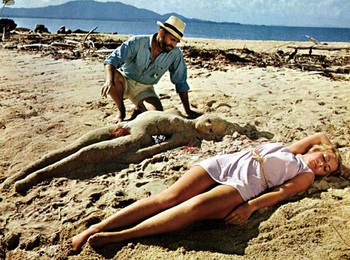 Age of Consent is a 1969 romantic comedy-drama film directed by Michael Powell.

Bradley Morahan (James Mason) is an artist whose sculptures and paintings are selling quite nicely in New York, but who feels he has lost his creative spark. In an effort to find inspiration again, he goes back home to Australia, renting out a dilapidated cabin by the beach on a remote island.

He finds inspiration in the person of Cora, a shockingly gorgeous teenage girl played by 22-year-old Helen Mirren. Cora, an orphan in the care of an awful monstrous alcoholic grandma, longs to escape the island and move to Brisbane where she can become a hairdresser. Bradley and Cora start to form a bond as he paints her, but "Ma Ryan" (Neva Carr Glynn), her horror of a grandmother, threatens to ruin everything.

Powell's last theatrical feature, and Mirren's first starring role. Based on a semi-autobiographical novel by Norman Lindsay, whose life also inspired another movie about artists and sexy models, Sirens.