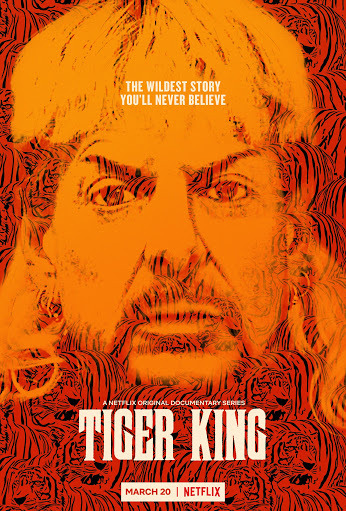 "Animal people are nuts, man. They're all fuckin' crazy."
"He was like a mythical character living out in the middle of bumfuck Oklahoma who owned 1,200 tigers and lions and bears and shit."
— Rick Kirkham describing Joe Exotic
Advertisement:

Tiger King: Murder, Mayhem and Madness is a True Crime series from Netflix, premiering on March 20, 2020. The story focuses on the intricate web of rivalries and manipulations within the American exotic animal collecting community, as seen through the lens of gun-toting gay polygamist country singer/zoo owner Joe Exotic (real name Joseph Maldonado-Passage, né Schreibvogel) and his feud with animal rights activist Carole Baskin.

The seven-part docuseries looks at the bizarre celebrity of Exotic, along with the entire industry of big cat breeding that involves a cast of colorful characters, including a former cocaine drug lord who may have been the inspiration for Scarface; Baskin, who is speculated to have murdered her husband after his mysterious disappearance; Bhagavan "Doc" Antle, another eccentric zoo owner whose work force resembles a sex cult; and how they're all connected to one another via their obsession for big cats.

Things get even weirder as the series goes on.

The show comprises seven episodes, with a bonus retrospective episode added on April 12 after the show's surprise success. Initially billed as a limited series, a second season, titled Tiger King 2, was released on November 17, 2021. A special Mini Series, Tiger King: The Doc Antle Story, was released on December 10, 2021.

Not to be confused with King Tigers, though both contain racists who may or may not be on meth.

open/close all folders
Tropes A-E
Tropes F-L
Tropes M-R
Tropes S-Z
♫ So this is goodbye
My last farewell
To all of my fans
You're my biggest thrill
My biggest thrill... ♫