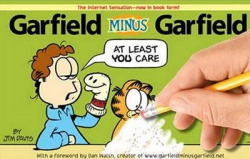 From a funny comic to a depressing and psychedelic experience in one eraser move.
I'm not crazy, I promise... someone deleted Garfield.
— Jon Arbuckle commenting on the webcomic
Advertisement:

In a World… where Garfield never existed, one man imagines that he does.

Garfield Minus Garfield is a strip adapted by Dan Walsh from selected Garfield strips. In this edited version, Jon is the only main character; all other main or non-essential cast (and their associated dialogue) have been removed. However, Jon still behaves as though they, most often Garfield, were there.

Garfield Minus Garfield has been published in a book, which contains the original strips alongside their "Minused" versions, as well as a foreword by Garfield creator Jim Davis (who not only openly approved of the concept, but made several "Minused" strips for the book).

Other people have made edits to Garfield strips, these edits including, but not limited to: putting random Garfield panels together; Silent Garfield, which removes all thought balloons; Realfield, similar to Silent Garfield and also replaces Garfield with a photo-realistic cat drawing; and Garfield As Garfield, which replaces Garfield with the 20th President of the United States, James A. Garfield. These predate Garfield Minus Garfield by a few years. Dan Walsh admitted he was not the first to come up with the idea of editing the strip or removing Garfield entirely, but he was the first to put the edits on one site as opposed to assorted forums and imageboards, and so got the most attention.

. As with everything, there exists a subreddit for the comic; the /r/garfieldminusgarfield subreddit

Garfield Minus Garfield provides examples of: