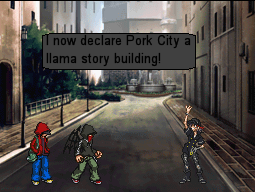 About as Logical as it gets
Advertisement:

Gatito is a webcomic based loosely off The World Ends with You. It follows everyone's favorite Support Reapers BJ and Tenho as they journey to revive 777. After that, the plot dies, and it becomes completely random issues with no seeable goal in sight. The Author, Pheonyx, has admitted on multiple occasions that she doesn't know where she is going with this.

Featuring references to other TWEWY Fanverse Comics such as SEAAOM, Gatito is one of the higher quality ones there is.

Can be read at its brand new shiny archive here

The Gatito series provides examples of: