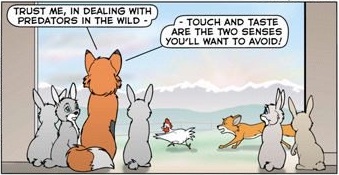 (pronounced Fox Paws) is a webcomic by Robert and Margaret Carspecken about the adventures of the red fox Randy and the other Green Mountain Studio Animals. Most of the animals have been trained by humans; Randy himself is an actor who has appeared in ads, TV shows and movies.
Advertisement:

Many story arcs deal with the result of Randy's sheltered upbringing; he's innocent and gullible, can't avoid traps or track scents, doesn't eat his fellow animals, and has no idea how to treat Cindy, the wild vixen he has a crush on — or Dusk, the less scrupulous wild vixen who has a crush on him.

The webcomic has a strong continuity, so reading through the archives will help you understand the current story lines. A new comic appears every Monday, Wednesday and Friday.

Most of the cast has picked up a lot of human characteristics, even though they are portrayed at least semi-realistically.

Then there are the animals outside the studio:

Humans leave the animals mostly alone, although Randy has done some acting jobs for them. The animals can't communicate with the humans beyond Myrtle's very bad handwriting and Cocky's very bad translations, although all of the domestic animals understand English.

Being produced by two professional writers and illustrators, the webcomic and artwork are of great quality. It is suitable for all ages, and contains occasional references and quotes from TV shows. As of March 2022, the archive

Now has a barebones character page.

Not to be confused with a, well... faux pas.