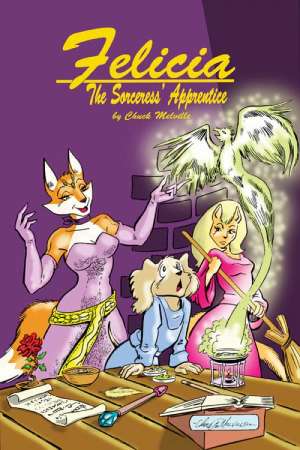 Felicia, Sorceress of Katara is a comedic furry fantasy series spanning a number of print comics, short novels, and webcomics by Chuck Melville. They center around the titular sorceress, who uses both white and black magic in defiance of the Magi council and the forces of evil.

, currently being re-posted online, but she proved to be rather popular in comparison and went on to star in the graphic novel Melari's Wish and a number of novellas. Currently out of print but they can be purchased second-hand, and at least one story, Felicia and the Wrath of the Elder Glops

is in e-book format. Though the webcomic is available in print at IndyPlanet

The novel Felicia and the Night of the Basquot

The latest site for the Felicia webcomic is here.