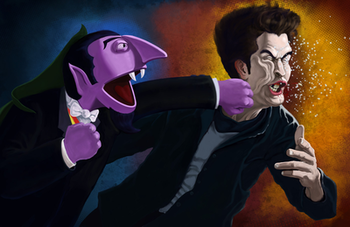 "You don't know how to change your body into mist or a bat. You can't heal any of your gunshot wounds. And now that you're out of bullets, you can't even defend yourself. You dare to call yourself Nosferatu? You disgust me!"
— Alucard, Hellsing
Advertisement:

A consequence of the Our Vampires Are Different trope. This is a form of Take That! where one author takes a shot at another author for the choices they made in depicting vampires, or aspects of the mythology the author finds silly.

Vampires are likely the most ubiquitous fantastic creature in Urban Fantasy. They are clever, irresistible, enticingly dangerous, and have the perfect skillset for living among humans.

There are many tropes associated with vampires, few authors use all of them, and they all have opinions about which ones to use. For example, in one author's work the idea that vampires can fly might be perfectly reasonable, but the idea that they fear moving water is just silly. In another author's work it might be reversed. These two authors feel it is necessary to point out why their choice was the right one and the other guy's the wrong one. This also leads to the other vampires being mocked for both having specific weaknesses, especially the traditional ones (eg. what kind of a vampire is it that can't even withstand sunlight?), and for lacking them (what kind of a vampire walks outside in broad daylight?) In some cases, vampiric weaknesses are mocked, changed or removed despite their inclusion 'as standard' actually being more logical.

Dracula is probably the most common vampire to be on the receiving end, since he is the source of almost every modern vampire trope, and hence embodies most of them in some version or another. On the modern end, Twilight is another very common easy potshot for vampire parodies, partly for the opposite reason that it averts so many traditional tropes. Additionally, the extreme negative reactions it has drawn from those outside its fandom make it a very easy target. The other two frequent targets are Buffy the Vampire Slayer and The Vampire Chronicles, mainly because those are the only two additional works for which the writers can be sure the audience will know what's being mocked.

This is used in vampire comedies, or at least for adding some fun in a serious vampire tale. Show the vamp garlic? He takes a bite. Hold out holy water? He drinks it down. Cross? "Oy vey, have you got the wrong vampire!"

The trope sometimes occurs with other fantasy creatures — Terry Pratchett did it with most of his dragons, though he includes more than passing nods to classical interpretations as well — but an overwhelming majority of these seem to be centered on vampires. This may be due to vampires being the most common creature in Urban Fantasy, or the fact that there are so many minor and major variations on the Vampire's features, abilities, and weaknesses, rivaling even Trolls. Plus it would be difficult, for example, for Dungeons & Dragons elves to comment on The Lord of the Rings elves, since Middle-Earth doesn't exist in Greyhawk — even in fiction. One cannot have a pop culture commentary in a world with no pop culture.

This trope is not just Our Vampires Are Different, it requires there to be a Take That!, or at least some commentary on how this vampire is different from (and probably better than) other vampires.

He also has no problem with holy symbols, saying that he was a nice guy when he was alive, so why should he care now that he's undead?