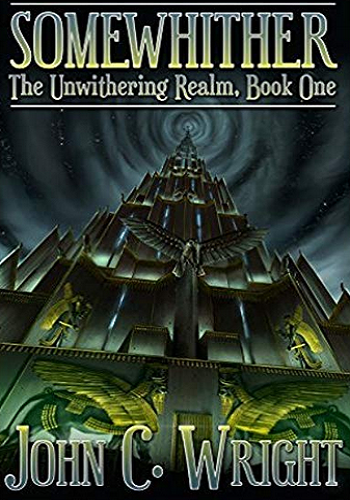 In other words, I consider the book to be, as Lewis considered Narnia, a ‘metaphysical speculation.’
His speculation was what if Our Lord appeared in a world where our legends are real, but the Sons of Adam are but legends?
My metaphysical speculation is what if Saint Ignatius of Loyola were bombarded by cosmic radiation during an experimental rocket flight, along with jolly Saint Nicholas, Saint George, and Mary Magdalene, which gave them Way Cool superpowers, so that, instead of founding the Society of Jesus, he founded the Justice League of Rome, and made their headquarters in the Baxter Building, and fought vampires, werewolves, mummies, Viking Berserkers, Paynim Genii, Albigensian Gnostics, Sauron the Great, and Galactus?
—John C. Wright

's description of the general mood of the book.

Somewhither is a cross-genre fantasy book by John C. Wright, the first book of a trilogy named A Tale of the Unwithering Realm. It will be followed by Nowither and Everywither.

Ilya Muromets is a boy just entering adulthood, and he has a lot of questions. Why does his dad regularly go on mysterious "business trips" in riot gear? Is his mom really dead, as Ilya was told, or is she still alive somewhere? Is Ilya's Mad Scientist boss really insane, or is his theory right? Why does Ilya look so different from his brothers? And just how many universes are out there?

A lot, it turns out. The Multiverse is real, and each Earth is a world with an entirely alternate history, and sometimes inhabited by creatures that are not man—mostly unfriendly. But what's truly bad is that one of the alternate Earths, where the Dark Tower looms above for tens of kilometers, is the home of a militaristic empire which possesses the secret of interdimensional travel, and has already used it to conquer nearly the entire multiverse. Our Earth is next.

Ilya soon finds himself the only man who can oppose the might of the Dark Tower. With a number of improbable allies from all over the multiverse and with his own strange extraordinary powers, he must save the world — scratch that: save the worlds — and hopefully rescue Penny Dreadful, his boss's beautiful daughter, held within the Dark Tower's clutches.