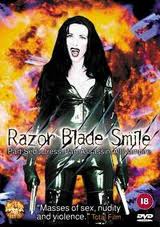 Lilith Silver is a 150 year old vampire assassin who latest contract to kill all members of the mysterious and evil Masonic "Illuminati" sect leads is part of a deeper plot that it first seems.