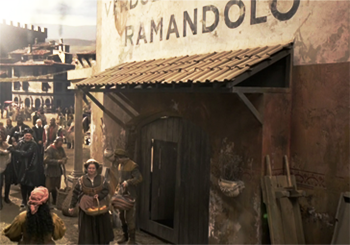 What's the big deal? It's only a couple hundred years off.

Typefaces, or fonts, are Serious Business. Although they may be taken for granted by most people, typographers and graphic designers treat them with reverence.
Advertisement:

Because of this split in sentiment, there are instances where works take place in a different time period, but a font that was not invented is used because, to some, they all look the same anyway.

This leads to designers becoming highly annoyed, although others who aren't attuned to the differences in similar typefaces don't particularly notice. Or care. Even medieval, pre-print manuscripts with modern letters will probably go unnoticed by most, because we are so used to seeing neat, standardized lettering in books. Under the right circumstances, this can count as an Acceptable Break from Reality if text that the audience needs to read is rendered more legible, with the calligraphy "modernized" just as the spelling is.

Keep in mind, however, that some movie-makers purposefully use anachronistic type; a modern incarnation of an old-style typeface can evoke a particular time-period while still engaging the audience. Also, an evocative type treatment can avoid a movie looking dated rather than a tasteful period piece.

For more in-depth insight on this, read the article by Mark Simonson here.

"If you make a period piece, you shouldn't use a font from the Futura! I mean, what the Helvetica were they thinking? Arial typographer would never allow this to happen! I ought to slug those Wingdings for the Myriad of ways they have failed."