Recap / Buffy the Vampire Slayer S2 E7 "Lie to Me" 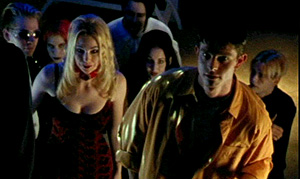 "Things used to be pretty simple. A hundred years, just hanging out, feeling guilty. I really honed my brooding skills. Then she comes along."
—Angel
Advertisement:

Hey, look! It's Ford, an old friend (and flame) of Buffy's from Hemery High. He surprises Buffy with news that he's just transferred to her school. Ford regales everyone with embarrassing stories about Buffy, to Willow's delight and Xander's deep irritation.

Later at the Bronze, she introduces Angel to Ford, whom Angel obviously doesn't take a shine to. As Ford and Buffy leave, Buffy hears a suspicious clattering in an alleyway. She asks Ford to go back and fetch her fallen purse, then runs toward the sound. Ford pretends to backtrack for a second before tailing Buffy around the building, where he witnesses her stake a vampire. She makes up a lame story about cats, but Ford reveals that he already knows she's a Slayer. Buffy is relieved that he knows.

Ironic segue time. Ford knocks on the heavy metal door of a nightclub. He's let in, and tells a group of teens inside that in two days, they will be immortal.

Meanwhile, Angel pays a visit to Willow and asks to do a background check on Ford. Willow does a search and finds no record of him enrolling at Sunnydale High. The rest of the Scooby gang tracks Ford's whereabouts to a place called the Sunset Club. They notice everyone inside is Pro-Vampire.

Night. Buffy and Ford have just finished a walking tour of Sunnydale. (They don't look particularly spent.) Seeing a pair of vampires prowling the school, Buffy hands a cross to Ford, who draws a stake of his own. Buffy looks askance at that, but tells Ford to stay frosty. In the resulting melee, Ford grabs the second vamp — a female — and menaces that he'll let her live if she tells him what he wants to know. Buffy stakes her foe, and comes running back to Ford, who's now alone. She asks where the other vamp is, but Ford says he dusted her. In the library, the blonde vampire that Ford set free barges out of Giles' office with one of his volumes and escapes through the stacks. Buffy recognizes the vamp and realizes Ford lied to her.

Spike's lair. Ford crashes the place and geeks out, saying that the place is "so cool," to which Spike rhetorically asks if he has anyone on watch. Ford knows who Spike is, and he's offering a token of goodwill. Cue the female vamp handing Spike a book, which he admits will be very useful (as groundwork for a later episode). Ford offers him a deal: "You make me a vampire, and I give you the Slayer."

The next day, Ford catches Buffy and tells her he had a blast the previous night. They make plans to meet at this spot at nine. Ford returns to his club to finish the arrangements, but Buffy's already lying in wait. Ford signals his toady, who sidles away and locks the door. Ford quickly spills his entire scheme, gloating that the club entrance is "rigged up special," and can only be opened from the outside. Privately, Buffy works out that the rest of the kids aren't going to be changed; they're just fodder. When she pleads that these kids don't deserve to die, Ford blurts out that neither does he— but he has terminal cancer and vampirism would save him (though without a soul "he'd" be dead in either case). Buffy looks stunned; had no idea. Ford bitterly goes on that he's got at most six months to live. Buffy apologizes, but doesn't buy into his solipsistic diatribe. If Spike's gang comes in and starts feeding, she promises she's going to kill Ford before he gets to reap his reward.

At sunset, Spike and his vamps spread out and start chowing down. Buffy knocks Ford out when he tries to stop her warning the others, and spies Dru on the balcony observing the feeding frenzy. Buffy leaps over the rail, grabs Dru and holds a stake to her heart. Spike is alarmed and orders everyone to halt. At Buffy's order, he orders his crew to let the humans go, which they do. Buffy sidles over to the exit, then pushes Dru into Spike's arms and runs out, slamming the door shut again. Spike attempts to pursue her— then stares at the door in bemusement. Oops. "Where's the doorknob?"

Outside, the kids limp off as Angel, Willow, and Xander arrive. Buffy knows that the vamps will get out eventually, so she'll come back when they're gone. Xander wonders why, and Buffy clarifies, "For the body." Ford regains consciousness locked in with the vamps, and points out that he fulfilled his end of the bargain by delivering Buffy and the others; it was Spike who failed to keep them there.

Sure enough, Buffy reenters the club the next day and finds Ford lying dead at her feet.

At the cemetery, Buffy and Giles lay roses on Ford's grave, waiting to see if he'll rise or not. Ford pops out from his grave, now a vampire. Apparently, Spike kept his promise. He barely gets to blink before Buffy matter-of-factly kills him. As they walk off together, Buffy asks Giles if life gets any easier, and Giles endearingly lies his ass off.

But she sounds grateful, anyhow.