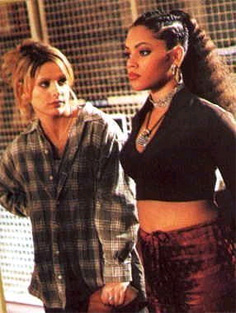 Kendra: "Who are you?"
Buffy: "Who am I? You're the one who attacked me, who the hell are you?"
Kendra: "I am Kendra, the vampire slayer."
Advertisement:

The school is decked out in balloons and banners galore, celebrating the start of "Career Week." Buffy is fatalistic because the students around her are dreaming of the future, while her career as Slayer is already set in stone.

Dru is laying tarot cards whilst another vampire attempts to translate an ancient text, with Spike glaring over his shoulder. The translation is nonsensical and even Dalton (the transcriber vampire) can't figure it out. Spike is reaching the end of his patience and grabs Dalton, ready to beat him up, when he's interrupted by Dru. She looks up from her cards and says that they need a key to decode the scripture.

While out on patrol Buffy witnesses Dalton chiseling something out of a mausoleum wall, but he escapes when she is distracted by another vampire. She enters her bedroom through the window out of habit (despite the fact that her mother is out of town) and finds Angel waiting, as usual. He spots a picture of Baby Buffy on ice-skates, and Buffy explains she used ice skating as an escape when her parents fought, which was often. Angel proposes they go sneak into the ice rink tomorrow evening when it's closed.

At school the next morning, the test results are revealed — much to the chagrin of Buffy and Xander, who are railroaded into Law Enforcement and the Department of Correction, respectively. Willow, meanwhile, is quietly ushered into a VIP area with classical music and a white-jacketed waiter ("Try the canapé"). Some suits announce that she's to be recruited by a leading software company, along with Oz, the boy who has been watching her for weeks.

Spike and Drusilla examine the key stolen by Dalton, a gold cross. Spike decides to call the Order of Taraka, an ancient guild of assassins, to keep the Slayer off his back for a while.

Buffy points Giles to the crypt from earlier. Giles realizes with concern that Josephus du Lac (a theologian who was excommunicated by the Vatican) is buried there. He is the author of the book stolen from the library, and Giles believes the decoder key was stolen from his reliquary.

In the meantime, the assassins begin to arrive separately. A large biker-type dude with one eye gouged out exits a bus; a young Jamaican girl stows away in the cargo hold of a plane; a nerdy, innocuous door-to-door salesman struts past Buffy's house to her next-door neighbors'. He kills the woman by disintegrating into hundreds of writhing mealworms which can reshape themselves into limbs at will.

Buffy manages to keep her ice skating date with Angel. The one-eyed assassin chooses this moment to strike. Angel arrives in time to help fend him off while Buffy kills him with the blade of her skate. Angel, recognizing the assassin's ring, asks Buffy if she knows what it means (I just killed a Super Bowl Champ?), and then warns her that she should split from Sunnydale. The female from the plane watches from the shadows.

Buffy is jittery and suspicious of everyone now. After sunset, Buffy trudges back home, but rethinks it, unaware of the salesman ("Norman") staking out her place with binoculars. She decides keep walking to Angel's place.

Angel goes looking for information on who placed the hit on Buffy. A bar owner, Willy, finally confirms Angel's suspicions that Spike is behind the assassins, but before Angel can leave, he's attacked by the mysterious female. They fight, and she locks him in a metal cage in front of an eastern window, with only a few short hours until sunrise.

Giles phones Xander and asks him to go to Buffy's house and check on her. Giles awakens Willow, who had fallen asleep ("Don't warn the tadpoles!") and reveals that the missing manuscript is a ritual to restore a weakened vampire back to health.

Cut to Revello Drive, where Xander and his grouchy chauffeur (Cordelia) have just arrived. As Xander goes searching, Cordy hears a knock at the door and lets in Mr. Mealworm, again appearing as a cosmetics salesman promising free samples.

Meanwhile, Buffy has decided to crash on Angel's bed. She awakens in time to dodge to the Jamaican girl standing over her with an axe ("You must be number two"). They wrestle for a bit, and Jamaican girl asks to know who Buffy is. Buffy, confused, demands her who she is.

"I am Kendra, the Vampire Slayer."