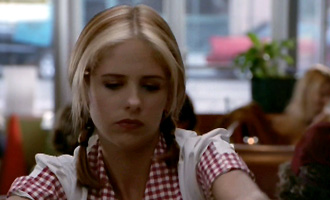 "I'm Buffy, the Vampire Slayer, and you are?"
—Buffy Summers
Advertisement:

Ah, a graveyard. It's good to be home. A newly-risen vampire struggles to climb out of his grave. As he's almost free, he looks up, and the camera pans back through a pair of legs standing in front of him. Psych. It's Willow, sporting a new haircut and a sly smile.

Xander and Oz move in to assist. Oz, however, has a little trouble getting the wood out of his pants, and the vamp takes the opportunity to do a cool back-flip over Xander and escape. Oz suddenly recognizes the vamp as Andy Hoelich from the gymnastics team. Xander, fuming, chastises Willow for her cheesy line, but she defensively points out that Buffy always has a quip ready. Xander misses her punnage, and Willow admonishes him for breaking the "past-tense rule." Right, right; Buffy's due back any moment now.

Buffy wakes up. She walks to the window, and the camera pans out to reveal a street that's definitely on the wrong side of the tracks.

In the morning, Buffy, in pigtails and a checkered uniform, waits on a young couple who are canoodling. The girl is ex-vampire groupie "Chantarelle" (from "Lie to Me"), only looking much more like a Street Urchin. The lovers have matching tattoos that, when placed together, form a heart with their names on them: "Rickie" and "Lily." After reading Buffy's name tag, which says "ANNE," Lily wonders if they've met someplace before.

Meanwhile, Sunnydale High is rebooting for the new year. Oz was supposed to go to summer school but didn't, so he's repeating senior year (lucky us). Xander and Cordelia initially look happy to see each other again, but each is waiting for the other to make the first move. After some fumbled dialogue, they dart off in opposite directions. Giles continues his search to find Buffy. He gets off the phone and announces that he has a lead—a report of a young girl fighting vampires in Oakland. This is apparently not the first such lead they've had. Xander suspects they won't find Buffy unless she wants to be found.

Night. Buffy walks back from work. Lily calls to her, "Buffy?" She asks if Buffy recognizes her, and promises that she didn't tell anyone Buffy's identity. We learn for sure that Lily is homeless, and Buffy reveals that Anne is her middle name. Inevitably, Lily asks Buffy for some cash, but an old man shambles in between them. He creepily says, "I'm no one," and wanders out into the street before freezing like a deer in the headlights. Since he's actually in the headlights, Buffy races out and pushes him to safety, and gets hit by an SUV. A crowd forms around Buffy, but she recovers and quickly runs off. Rounding a corner, she runs right into a missionary, knocking a bunch of flyers out of his hand. As they gather them up, he introduces himself as Ken, and gives Buffy a flyer for a halfway house called "Family Home."

Lily finds Buffy at the diner. She tells Buffy that Rickie has disappeared, and begs her for help. Cut to a blood bank, where Lily exposits that she and Rickie went there the day before to score money (and cookies). Buffy asks a large female doctor if Rickie has come around. No sirree, bob. As they leave, the ominous music of "I'm Not Telling The Whole Story" plays over the doc's face. Out in the street, Buffy finds the old man whose life she saved the previous night lying dead in the gutter, having drunk drain cleaner. She kneels and turns his arm over, and finds the "Lily" tattoo. She realizes that Rickie has somehow been "drained" of his youth.

Buffy breaks the news to Lily, who doesn't take it very well; she accuses Buffy of bringing a monster along with her. Lily runs out of Buffy's apartment—straight into the arms of Ken. He invites her to come to Family Home, telling her that Rickie has already joined them. Meanwhile, at the blood bank, Buffy interrogates the doctor from earlier, who pleads that she just forwards "them" the names of the "healthy ones."

Cut to Ken preparing Lily, who's now wearing a smock, for a ceremony called a "Cleansing." Ken instructs Lily to kneel in front of an ink-black, rectangular pool. He explains that the pool is to "wash away the past." With motor oil? At the front door, Buffy's asking some goon if she can join up ("...I woke up, and I looked in the mirror and I thought, 'Hey! What's with all the sin?'"). When that doesn't work, she kicks the door open and finds Ken in the cleansing room...just in time for the tar to suck Lily into the pool.

Buffy tries to follow, but Ken tangles her up and they both fall in, right through the black pool and into a hellish-looking forge. Young men and women, all dressed in the same style of smock as Lily, working as slaves. Some are being whipped by demon guards. Ken reveals himself as a demon of some sort with a human face glued on, and sends his guards after the girls. The two are quickly caught and told that they will be living there for as long as they can serve as useful slaves. Time moves much more quickly in their current reality, which is why Rickie aged so many years while no time had passed on Earth.

Buffy, Lily, and several other kids are brought before a demon guard for orientation. He barks at the kids, "YOU ARE NO ONE NOW." Right. Let's practice. Demon Guard asks a boy at one end of the line who he is. The boy stammers, "Aaron." Wrong answer. Guard clocks him with a club. Buffy seems to steel herself at that. Lily's next in line: she cheeps, "No one!" Ding ding ding! You've been voted Most Likely Not To Get Clocked On The Head By A Demon Guard! Then it's Buffy's turn:

"I'm Buffy. The Vampire Slayer. And you are?"

He tries to wallop her, but Buffy makes short work of the guards, and instructs the kids to follow her. Lily shepherds the kids out; they reach a large iron gate, which Buffy lifts up with Slayer strength. The kids go under it, and Buffy starts to go herself when Ken tackles her from behind. He bowls her over, and the gate crashes down, impaling him through both legs. The kids escape upward through the portal, while Buffy gives Ken her "pissed-off Gandhi" impression, bringing the club down on his skull.

Buffy's apartment. She offers to give Lily the tour, but only take two steps before announcing, "This concludes our tour." Buffy says the rent is paid up for the next three weeks, and that Lily can take over her shifts at the diner. Lily regards Buffy's diner uniform, and asks for permission to be "Anne". Aw.

Back at home, Joyce hesitantly answers the door again. She opens the door to find her daughter on the front steps. After a few moments, they hug.