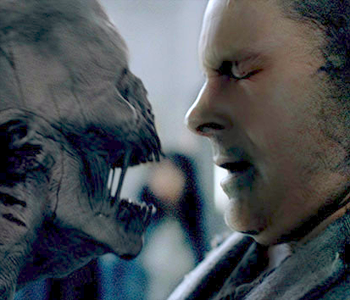 You know, gingivitis is the leading cause of all tooth decay.
Advertisement:

In a work of fiction with many kinds of fantastic talking critters, how can you tell which are on the side of good and which aren't?

Simple, the good guys have expressive lips and the bad guys have scary, protruding, teeth, possibly dripping with mucus. Commonly found in reptiles and the undead.

Probably related to our primordial instincts relating to bared teeth, such as the "chimpanzee smile" actually being a means of threatening other apes.