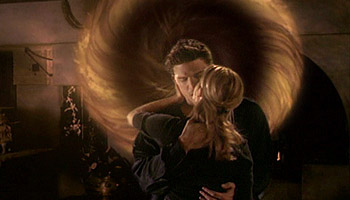 "I lost a friend tonight, and I may lose more, the whole Earth may be sucked into hell and you want my help 'cause your girlfriend's a big hoe! Well let me take this opportunity to not care."
—Buffy Summers
Advertisement:

Buffy arrives too late to save Kendra from Drusilla's surprise attack, and ends up being arrested for Kendra's murder. Escaping from the police, she goes to the hospital to find that Willow is in a coma, and Giles has been abducted. Now a wanted fugitive, Buffy is almost caught by the police, but is saved by an unexpected ally: Spike. He tells Buffy that he does not want the world to end either (it is far too fun a place) and that he wants to take Dru and leave town, so they declare an uneasy truce.

Buffy decides to convene a meeting with Spike inside her home, but is intercepted in the driveway by her mother. The three are attacked by a vampire sent by Angelus, and Joyce watches in shock as Buffy dusts him. Whoops. Buffy tries to explain her role as the Slayer to her mother, who is resistant to accepting the truth. Following a heated argument, Joyce tells Buffy that if she walks out of the house, she won't be welcome back. Buffy goes. She visits the school to procure weapons, and is confronted by Snyder, who gleefully expels her.

Spike returns to the mansion, concealing that he has healed from his injuries enough to walk. To keep Angelus from killing Giles, Spike suggests that Drusilla use hypnosis on him. She appears to Giles as Jenny Calender, and he tells her that Angelus is the key. He must use his own blood, not someone else's, to awaken Acathla. In her hospital bed, Willow (despite protest from Xander), decides to try the Restoration Spell again.

Buffy heads to the mansion to confront Angelus, who is surprised to find himself getting attacked on both sides by Spike and the Slayer. After rendering Drusilla unconscious, Spike flees town. Buffy overpowers Angelus in a duel, but not before he has already removed the sword from Acathla. Just as Buffy is about to deliver the killing blow, Willow completes the spell and Angel's soul is restored. Buffy realizes that Angel is back and embraces him. However, by then Acathla is awake and creating an expanding vortex. Buffy kisses Angel, professes her love for him and drives her sword through him, sending him to Hell and sealing the portal.

Joyce finds a note on Buffy's bed, and clothes have been strewn everywhere and her closet emptied. The Scoobies gather in front of the school, speculating on Buffy's whereabouts. Unbeknownst to them, Buffy boards a bus to leave Sunnydale.