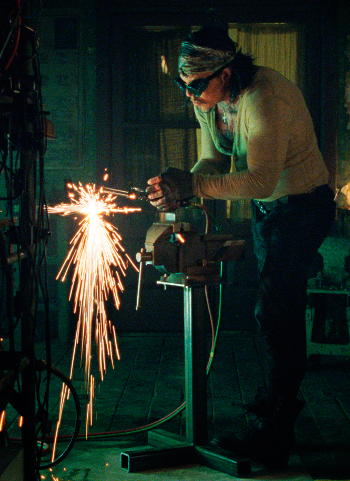 He's either welding midair or a tiny piece of wire. But he is building something, isn't he?
Advertisement:

What's the easiest way to show your characters hard at work fixing/repairing/building something? Show them welding, of course! Also, it will always be showy, sparky, manly welding, using electric arcs or oxyacetylene: Precision soldering irons are for wussies. The manly man at the right is cutting steel, probably before building something.

Compare Magic Tool when it seems like a tool (in this case a welding torch) can be used to do nearly anything.

Can occur in a Creation Sequence, Hard-Work Montage, A-Team Montage, and maybe a Forging Scene.