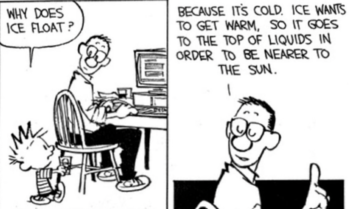 When things are strange and complicated, people like to explain them by analogy. Sometimes, this analogy is over simplified; for instance, while atoms are usually described as a proton-neutron nucleus with electrons orbiting it like planets round a star, in reality they don't resemble the solar system at all. However, it is still useful because it gives the listeners a simple concept they can grasp, while a more accurate explanation would confuse them or simply go over their heads. Once they've learned the analogy, they can continue to more complex topics that will eventually lead to the truth of the situation — or to another, more complicated set of lies.

This is likely to backfire if the listener takes the analogy too literally.

The term was coined by Ian Stewart and Jack Cohen, and used in the book The Science of Discworld. Discworld books occasionally make an odd analogy, then, when taxed, say, "no, it's nothing like that, but it's a lie you can understand."

Truth in Television as the atom example above shows. Considering how much we don't understand of the universe, science itself is this to a degree. (Stewart and Cohen have come pretty close to saying that all human knowledge will always be like this, because no description of reality is the same thing as the reality itself.) That said, only add general Real Life examples, please. (ex: "the atom looks like a solar system.")

See also Phlebotinum Analogy. May pop up while giving The Talk, thus leading to Miss Conception. Compare Layman's Terms. We're pretty familiar with it here on TV Tropes, due to Reality Is Unrealistic.

"Man, the trees sure are sneezing today."