Literature / The Book of Bunny Suicides 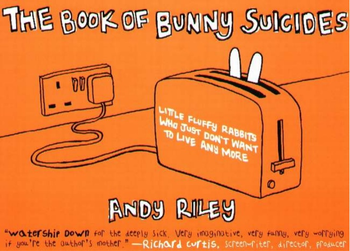 A book of bunnies committing suicide in various ways. Or rather, a book of mostly single image, black and white cartoons of bunnies just about to commit suicide.

Published in 2003. The cartoons are drawn by Andy Riley, who also drew the cartoons for the book Great Lies To Tell Small Kids. A sequel, Return of the Bunny Suicides, was published in 2004.