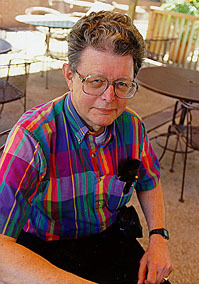 "So much American science fiction is parochial — not as true now as it was years ago, but the assumption is one culture in the future, more or less like ours, and with the same ideals, the same notions of how to do things, just bigger and flashier technology. Well, you know darn well it doesn't work that way..."
Advertisement:

Poul William Anderson (November 25, 1926 – July 31, 2001) was an American writer of Speculative Fiction, mainly science fiction, and occasional Historical Fiction and Fantasy, who was also involved in the founding of the Society for Creative Anachronism. Though much of his work was dramatic, he also wrote a fair amount of humor. He was known for combining the nuts-and-bolts of hard science fiction with interesting and unusual characters. His novel Tau Zero was one of the first to consider the extreme implications of relativity, and he was one of the first authors to create a biologically plausible Winged Humanoid alien species. On the more humorous side, he was the first to postulate a spaceship powered by beer. His penchant for doing the research also extended to his fantasy and historical works. He has been cited as a major source for Dungeons & Dragons. But he was best known for his sweeping Technic History space opera series, which was formed by Canon Welding his early Polysotechnic League stories with his later Dominic Flandry/Terran Empire stories.

The Other Wiki lists recurring themes in his work

as (among others) "larger-than-life characters who succeed gleefully or fail heroically," the folly of underestimating "primitive" cultures, and "tragic conflict... with no villains at all." His famous essay, "On Thud and Blunder,"

where he takes potshots at those who fail to use basic research, or at least common sense when writing Heroic Fantasy, is the Trope Namer for Thud and Blunder, though the term has acquired a meaning he never intended.

Oh, and it really is Poul Anderson, not Paul Anderson. So let's not mistake him with Paul Thomas Anderson or Paul W.S. Anderson.

Works of Poul Anderson having their own pages:

His other works provides examples of: