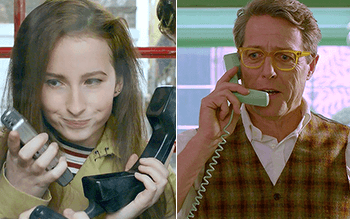 A person (first party) is communicating with another person (second party) and needs to imitate another person (third party). That third party might simply not be present, be dead, or simply won't play along. However, the first party has an audio recording of the third party, but the text in the recording doesn't suit the conversation. The first party quickly splices the third party's portion of the conversation together from the available text and uses it to trick the second party.

The source of the recording is commonly a voicemail, either the outgoing message or a message the third party left earlier.

Compare The Tape Knew You Would Say That, Of Corpse He's Alive, Manipulative Editing, Stupid Statement Dance Mix and Quote Mine. May be done out-of-universe with a Fake Shemp.

The Meta splices together an intercepted communication between Wash and Command to send the Reds after him.

The Meta splices together an intercepted communication between Wash and Command to send the Reds after him.