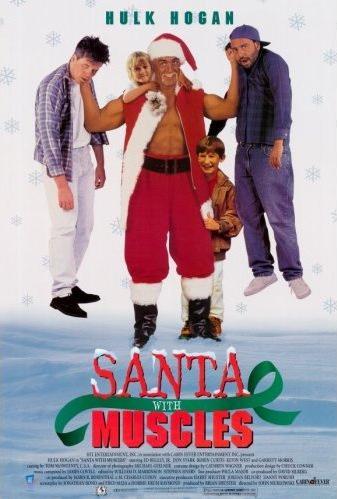 "I was pretty stunned to see the infamous "Santa rape" scene in the Warrior Christmas Special but that would not be the first nor the last time Santa took it full in the ass from the pro wrestling industry..."
— The Spoony One, opening his review of the film.
Advertisement:

Santa with Muscles is a 1996 comedy about a wealthy, greedy health food guru named Blake (played by Hulk Hogan) who winds up on the run from the cops when a paintball session goes wildly awry. Disguising himself as a Mall Santa, a blow to the head leaves him with amnesia — and thanks to an "elf" named Lenny who can use some, and perhaps his, money, he is subsequently convinced that he's the real Santa. From there, Blake decides to save an orphanage from supervillain Ebner Frost and his strange henchmen, who want the land the building is on for an unusual reason.

Executive produced by Jordan Belfort (The real one, not Leonardo DiCaprio). No, seriously.