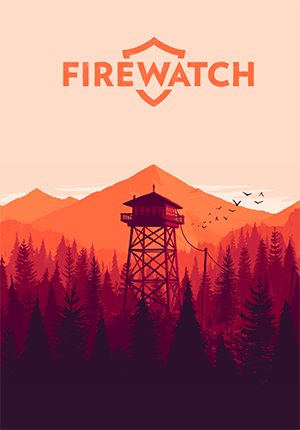 Delilah: Henry, there's something I... something someone should've told you about this area.
Henry: What is it?
Delilah: It's outside. The whole thing. And people come and go as they please. It's... It's madness!

Firewatch is an Environmental Narrative Game developed by Campo Santo and helmed by the former creative leads of The Walking Dead. It was released on February 9, 2016.

Henry is a middle-aged man, happily married to his wife, Julia. Ever since he learned that she was suffering from early onset dementia, however, he has been struggling with how to care for her, if he even should. One day, he finds an ad for a firewatch position in Shoshone National Forest in Wyoming, and takes it to get away and maybe contemplate. Arriving at the tower that is to be his home for the summer, his only regular human contact is the radio voice of the senior watcher in the next tower over.

However, things start to take a dark turn shortly thereafter...