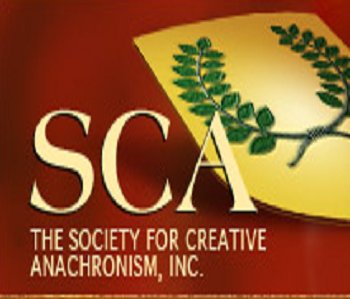 The Society for Creative Anachronism

is an organization dedicated to studying aspects of The Middle Ages and The Renaissance, much like War Reenactors. On any given weekend, somewhere in the world (usually several somewheres), people come from miles around, dressed in pre-17th century costume (or an attempt thereat), and fight in armor (with rattan swords), sing period or period-style songs, fight in armor, show off their skills with a pen/loom/anvil, fight in armor, eat a medieval feast, fight in armor, watch as the king and queen bestow awards on some deserving gentle, and fight in armor.

The Society began in 1966 as a medieval-themed May Day party in the backyard of author Diana L. Paxson's home in Berkeley, California. Author Marion Zimmer Bradley was among the guests and is credited with naming the group. Other notables known to have been involved in the SCA include authors Katherine Kurtz, Poul Anderson, Robert Asprin, and game designer Steve Jackson.

The 'Middle Ages' as depicted by the SCA are slightly different than the real-world events, and as such are called the 'Current Middle Ages' in Society parlance. 'Current' means that while strict historical accuracy is nice, it's not always practical in a modern context; as such, allowances are made in situations where actual historical information is limited or may not be entirely compatible with modern society, like indoor plumbing. People are encouraged to have discussions of a medieval context, rather than last week's sports results or their new video game. Accents and funny vocabulary are not required.

The Current Middle Ages are defined to span a rough time period: circa 600 AD to 1600 AD. This definition this allows a wide variety of personas, from many countries and walks of life. All members choose one or more "persona," a historical identity including a nationality and matching name. There is absolutely no requirement that this be related to the member's real-life nationality or ethnic background. The identity is done primarily to provide a focal point for that member in their area of interest, rather than as any sort of "acting" role or attempt at impersonation. The only hard-and-fast rules are that persona names must be historically accurate (or 'period'), a persona cannot be an actual historical figure or a previously used fictional character, and a persona's culture must have established some form of interaction with European Middle Ages society.

Establishing a persona may involve crafting an outfit (the archaic term 'garb' is preferred), which can be as elaborate as a person's budget and time allow, and it is a serious faux pas to nitpick another person's garb. When not in SCA garb, a person is said to be in 'modern' clothing; it's sometimes called 'mundane' garb, but that term fell into disfavor due to its somewhat negative and insular implications.

The SCA is organized into twenty "kingdoms" across most of North America, Western Europe, Australia, and Japan. These kingdoms are further divided into smaller subgroups based on the population of registered members: region, barony, canton, shire, and so forth. By the rules of the SCA, the monarchs of each of the kingdoms are decided by Crown Tourneys held every six months. To enter a Crown Tourney, the combatant must have a consort who will serve alongside them for their term. The victor of the Tourney and their consort are crowned Prince and Princess, and will serve as King and Queen six months after their victory, where the tourney for their successors will be decided.

The Current Kingdoms of the Knowne World:

Fun fact: According to the FBI, the SCA is technically the second-largest paramilitary organization in the United States, where "paramilitary" is defined as any group with a defined command structure that conducts survival/combat drills and operates without government oversight.note The largest? The Boy Scouts of America.