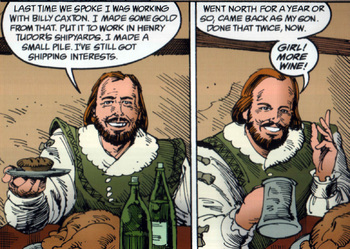 You're immortal, or just extremely long lived, and you want to stay in one place for a long time without people noticing that you don't age. So what do you do? You reintroduce yourself as your own child, then grandchild, etc. This handily gets around the problem of having to explain how you could have served in World War II and still only be 25 years old. This can also be used as a way to hang on to your property, by having the new identity "inherit" it from the old one.

Bonus points if you keep the same name — so John Smith becomes John Smith Jr, becomes John Smith III, etc. Bonus idiocy-points if you've ever allowed someone to paint your portrait or take your photograph while pursuing this strategy, as it will be discovered and expose your deception in future decades, unless if you (somehow) shapeshift over time.

A special case of Identical Grandson where they are actually the same character. Not to be confused with My Own Grampa, where a character is literally their own biological ancestor.

The inversion (a character claiming to be immortal is actually an identity passed down from mentor to student) is Legacy Immortality.