Film / The Man from Earth 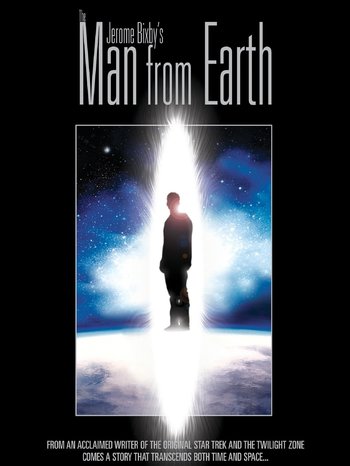 What if a man from the Upper Paleolithic survived until the present day?
Advertisement:

The Man from Earth is a 2007 Dialogue-Driven Science Fiction Drama film about a group of college professors and a grad student sitting together in a cabin during the going-away party of their Colleague. They discuss the plausibility of their departing friend's story: that he has witnessed thousands of years of human progress first-hand since the Cro-Magnon Era.

The professor, who calls himself John Oldman, reveals that he's secretly 14,000 years old and a former caveman. The movie revolves around the characters dissecting John's claims about him being that old, and especially historical happenings he claims to have witnessed and people he claims to have met or even been. To make it all the more interesting, every character is a teacher at a certain subject that sooner or later is relevant or brought up (there's an archaeologist, a psychologist, a biologist, historian and a Christian theologian/literalist), and everyone deals with each new part of the story from John in different ways.

The film proved surprisingly popular on torrent sites, causing it to receive more attention than an indie film of its budget normally would. As a result of its popularity, it received a sequel called The Man from Earth: Holocene, which was released directly to torrent sites for legal download in 2018.

Not to be confused with The Man Who Fell to Earth.