Film / The Man Who Fell to Earth 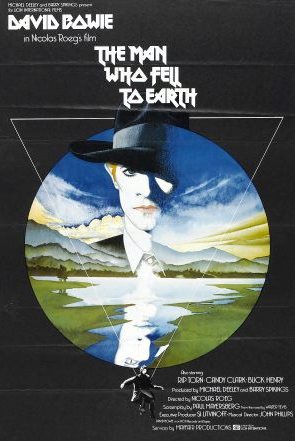 "I think perhaps Mr. Newton has had enough, don't you?"
Advertisement:

The film centers around an extraterrestrial who journeys to Earth after his planet experiences an intense drought, determined to find a way to ship water to it. As he amasses a fortune with a variety of high-tech inventions, intending to use the money to build a ship that will solve his planet's problem, he embarks upon a love affair with a simple girl named Mary-Lou, which is nice, one supposes. Thomas also ends up starting a love affair with television and alcohol, which is a lot less nice, one supposes. To reveal any more would delve this into spoiler city. Let's simply say the ending is... sad.

In late 2015 Lazarus, a musical stage play Inspired by… the source novel debuted off-Broadway. It was written by Enda Walsh and...David Bowie, who didn't appear in the show but contributed several new songs to it, as well as new versions of songs from his catalog. Michael C. Hall played Thomas in the world premiere staging, which was one of the last works Bowie realized in his lifetime— his final public appearance was at the show's opening night, and his studio recordings of the songs he wrote for it were later included on the 2017 posthumous EP No Plan.

The Man Who Fell to Earth provides examples of:

Alternative Title(s): The Man Who Fell To Earth