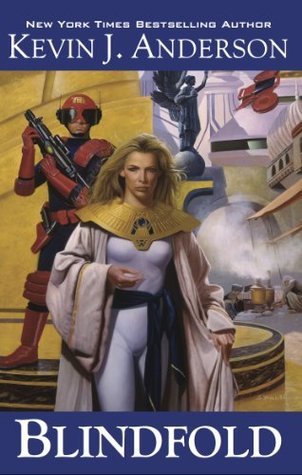 Blindfold is a science fiction novel by Kevin J. Anderson. Anderson sent the novel to Brian Herbert as a sample of his work in order to let him collaborate on the post-Frank Herbert Dune novels.
Advertisement:

The novel takes place on a planet called Atlas, which has been settled by humans roughly two centuries prior. It's not a very habitable planet with infertile soil and virtually no native lifeforms (meaning all they have to work with is what they brought with them from Earth). Every inch has to be painstakingly reclaimed from the planet. With Earth being roughly 50 years of travel away, the people of Atlas are on their own, although four ships have arrived since the original landing and a fifth one is on the way. Colony life is centered in First Landing, the original arrival site and the location of the Space Elevator to the orbital platform, as well as the hub of the maglev network. The rest of the colony is split into a number of landholdings, ruled over by hereditary families, all of them connected to First Landing via maglev lines. A unique local form of bacterium has been used to cultivate a drug known as Veritas. When ingested, it temporarily allows a person to read other people's minds. The drug is restricted to a special caste of people called Truthsayers, who are trained from birth to use Veritas in a responsible manner to give instant and final judgment on a suspect's guilt or innocence. The Truthsayer Guild is the pillar of Atlas community, the belief in the infallibility of Truthsayers keeping the colony from descending into anarchy. But what if one of them made a mistake?..