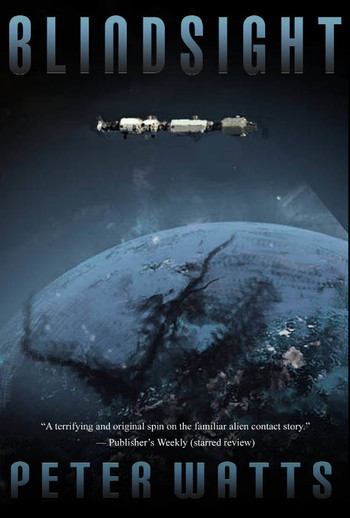 Blindsight is a hard Science Fiction novel by Canadian author Peter Watts. It's a dark and cerebral First Contact story that deals heavily with issues of sapience and what it means to be an "intelligent" species. Troubles with the publisher made the novel hard to find in stores, despite having been nominated for a Hugo Award, so Watts put it out on his website

Blindsight begins soon after a global event in the near future has stunned the world. Coming to be known as the Firefall, it unequivocally demonstrates mankind is not alone in the universe: thousands of alien probes simultaneously burning up in the Earth's atmosphere in a perfect grid, seemingly scanning the entire planet, and generating a powerful radio signal sent somewhere to the outer reaches of the solar system. In need of answers that simple unmanned probes can't provide, a ship called the Theseus is built and packed with as much cutting-edge technology as its creators can muster for the purpose of carrying a manned expedition of exploration and First Contact.

The crew is made up of odd and eccentric specialists: a linguist with surgically-induced multiple personalities, a biologist who has given up some of his neural pathways for senses and perception far beyond what a baseline human can experience, and an infamous soldier whose career-defining moment was an act of treason. The narrator, an analyst with half his brain removed, is sent to observe these transhumans and translate for the benefit of their earthly masters. And they are all led by a literal Vampire; a genius, sociopath, and cannibal who is nevertheless the only one coldly-logical enough to run the mission.

Depressing and pessimistic, yet enlightening, the story explores a variety of topics relating to consciousness, the nature of intelligence, information theory, and neurology, and has received highly positive critical acclaim despite its relative obscurity. It is followed by Echopraxia, a loose Sequel set on Earth during the events of Blindsight, featuring a different cast of characters.

This book features the following tropes (Warning: spoilers below):