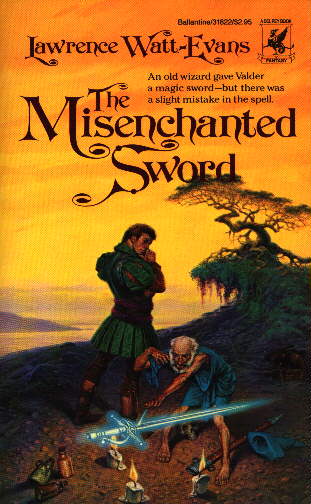 Valder is just a simple soldier in the army of Ethshar, on a simple scouting mission. When the enemy attacks in force, Valder is trapped behind enemy lines with a patrol chasing him. He then inadvertently stumbles upon an elderly hermit wizard, and the result is that the wizard's hut is destroyed by the enemy patrol.

The wizard, wanting nothing more to do with Valder, makes him a deal: he'll enchant Valder's sword, enabling Valder to return to his unit, and Valder promises to leave the wizard alone. The sword is enchanted...and what an enchantment it is. The sword is capable of killing anyone it's used against, and in fact Valder cannot be killed while he uses it.

Too bad there's a drawback...

The Misenchanted Sword, first of the The Legends of Ethshar fantasy novels by Lawrence Watt-Evans, details Valder's misadventures as he struggles to adapt his life around the power of his sword Wirikidor's enchantment...and the desires of those who want to take advantage of those powers.