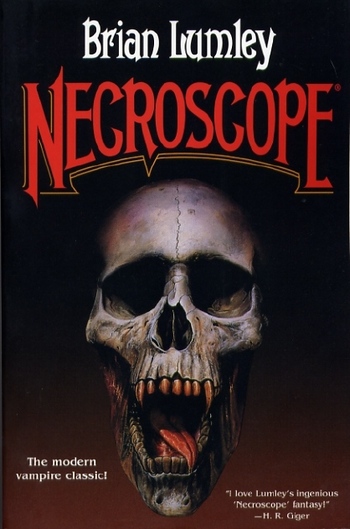 Enter Freely, And Of Your Own Will.
Advertisement:

Necroscope is a series of Cold War / Espionage/ESP/Vampire Fiction novels by Brian Lumley.

It is the 1970s and the Cold War is at its height. Twitchy superpowers are poised to annihilate the other paranoid and twitchy superpower, and take the world with them. You can't get much more screwed than that... oh wait, there are also vampires, necromancers and werewolves waiting in the wings to enslave or annihilate humanity (and willing to manipulate those governments to do it). Welcome to the world of Necroscope. From the height of the cold war, into the future the world will be caught a long and drawn out conflict fought by government sponsored Psychics, Espers, and oddly powered individuals. The opposition, pretty much the same, but you can also throw in the aforementioned supernatural creatures, a generous selection of mobsters, corrupt politicians, and traitors.