Everybody Loves A Clown 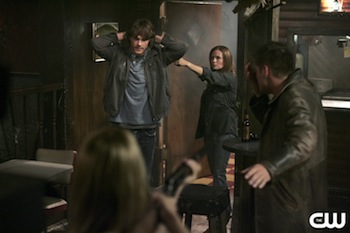 Mom, you know these guys?
Sam: [to Dean] About me and Dad. I'm sorry that the last time I was with him I tried to pick a fight. I'm sorry that I spent most of my life angry at him. I mean, for all I know he died thinking that I hate him. So, you're right. What I'm doing right now, it's too little. It's too late. [pause] I miss him, man. And I feel guilty as hell. And I'm not all right. Not at all. But neither are you. That much I know.

Sam and Dean meet a friend of their father who owns the Harvelle Roadhouse in Sioux Falls, South Dakota.

She tells them about a case in Medford, Wisconsin,

The brothers are still reeling from their father's death. While pursuing their father's research on the Yellow-Eyed Demon, Sam and Dean discover the Roadhouse, a bar frequented by hunters in Sioux Falls, South Dakota. Ellen Harvelle owns the Roadhouse. Her daughter Jo works there. Ash is a regular patron and a genius who offers to help track the Yellow-Eyed Demon. Ellen has collected information on a rakshasa

, a supernatural creature that takes the form of a clown in a circus in Medford, Wisconsin. Sam and Dean take the case, forcing them to work at a carnival.

For this episode = 4 humans and 1 rakshasa.