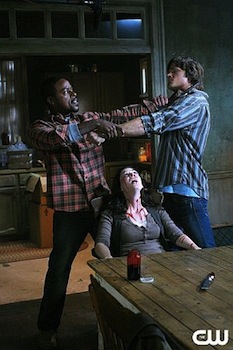 You think she's so different? Still want to save her? Look at her. They're all the same. Evil, bloodthirsty.
Dean: I can't talk about this to Sammy. You know I've got to keep my game face on. But the truth is, I'm not handling it very well. I feel I have this...

Gordon: Hole inside of you? And it just gets bigger and bigger and darker and darker? Good. You can use it. Keeps you hungry. Trust me, there's plenty out there that needs killing and this'll help you do it. Dean, it's not a crime to need your job.

Dean and Sam meet another hunter, Gordon Walker, while hunting a nest of vampires in Red Lodge, Montana

Sam and Dean hear about cattle mutilations and beheadings and take off in the completely repaired Impala for Red Lodge, Montana. They examine one of the severed heads, and discover retractable vampire fangs. They track down more vampires only to discover that this nest of vampires has reformed and are living off cattle rather than killing humans. However, their hunt brings the brothers into contact with Gordon Walker, a particularly zealous vampire hunter who doesn't believe the vampires' claims of reform. Gordon tortures Lenore, the leader of the vampire nest, by cutting her with a knife covered in dead man's blood. Sam and Dean realize Gordon knew that the vampires were not hurting anyone, but still was hunting them down because they were not human and therefore must be evil. They manage to stop Gordon and leave him tied up while the vampire nest escapes. However, the Winchester brothers realize that not all supernatural beings are pure evil, and this leads them to question their roles as hunters. They also realize that their father did not tell them about many aspects of the hunting community.

For this episode = 2 vampires.