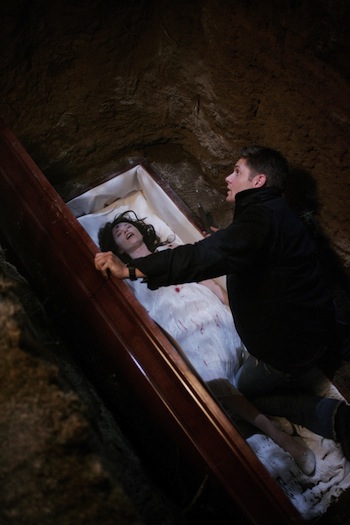 What's dead should stay dead.
"Sam. You and Dad...you're the most important people in my life. And now...I never should have come back, Sam. It wasn't natural. And now look what's come of it. I was dead. And I should have stayed dead. You wanted to know how I was feeling. Well, that's it. So tell me. What could you possibly say to make that all right?"
—Dean Winchester

A college student from Greenville, Illinois

is back from the dead and seems to be seeking revenge on those who betrayed her while she was alive.

Sam drags Dean along to Greenville, Illinois to bury their father's dog tags at their mother's grave. While they're there, Dean notices another grave, one surrounded by a perfect circle of dead grass. It belongs to a college student, Angela Maison, who died recently in a car accident. Dean convinces Sam to investigate.

They question her father, who is an Ancient Greek professor, her roommate, Lindsey, and her best friend, Neil. While they investigate, her boyfriend, Matt, is found with a slit throat. When they dig up her grave, it's empty, but there's a Greek divination spell etched into the coffin. At first, they suspect Angela's father of being a Necromancer, but he has living house plants in his home. Suspicion then falls on Neil, who is a teaching assistant in the Ancient Greek course. When they go to his house, no one is there. Dean has been reading Angela's diary, and guesses that Matt might have been having an affair with Lindsey. They arrive at her place just in time to save Lindsey, but their silver bullets have minimal effect on Zombie Angela.

Dean and Sam realize the only way to kill her is to nail Zombie Angela to her grave bed. They track down Neil at his office. Dean, realizing Zombie Angela is hiding in the closet, tells Neil they plan to perform a ritual over her grave that will return her to death. Dean tries to convince Neil to go with them, but he refuses, and Zombie Angela kills Neil. Zombie Angela arrives at the cemetery to kill Sam and Dean before they can perform the ritual. Sam lures her to the grave, injuring his hand, while Dean impales her in the coffin.

Meanwhile, Sam continues to confront Dean about his refusal to deal with their dad's death as Dean's actions grow more and more angry and erratic. Eventually, Dean tells Sam that he blames himself for their dad's death, and believes the demon was somehow involved.

For this episode = 3 humans and 1 zombie.