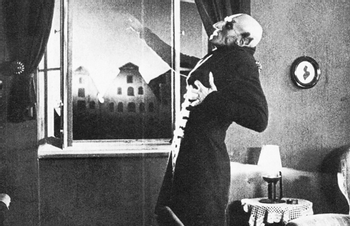 The Undead are neither dead nor alive, nor do they last in that state particularly long. For whatever reason, most media showing an undead character with sentience will have said character not be undead by story's end. Sort of like Schrödinger's Zombie, they can stay in their 'inbetween' state for hundreds of years if unobserved (by an audience), but appearing in a movie will force them to be either Killed Off for Real or brought back to true life.

Maybe they're tired of Immortality and choose to end their existence or cure their undead state, or embrace it so thoroughly they confuse eternal youth with indestructibility and get cocky fighting the hero. Whatever the case, undeath does not grant one the ability to stay alive no matter what ... well, undead no matter what.

Whether a vampire, lich, mummy, or rarer fare, you can rest assured that by the story's end any notable undead character will not be undead because of one of the following:

The extent to which this trope applies seems to be directly proportional to how much the portrayed version of undead can be said to fit and belong in the world once the story is over. Undead that can be empathized with, such as vampires, may very well continue existing indefinitely and be perfectly fine with it. Undead demonstrating angst over their situation, such as ghosts, demand closure and as such the narrative usually puts them out of their misery. Finally, the chance for assorted undead abominations such as zombies or Frankenstein's Monster to survive the show is vanishingly slim, as they are inherently unstable, seldom sentient and their condition is usually implied to be a Fate Worse than Death.