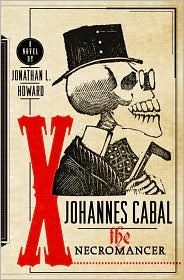 The first of the Johannes Cabal series of fantasy novels, Johannes Cabal the Necromancer is the story of the titular necromancer and his efforts to study magic. Unfortunately for Johannes, he sold his soul to Hell for power, and magic doesn't work quite as well without one.

In order to get his soul back, Johannes makes a new deal - to gather one hundred other souls within a year, aided by an evil carnival and armed only with his own wits and a big handgun. Hey, nobody said it would be easy...

Johannes Cabal the Necromancer has examples of: