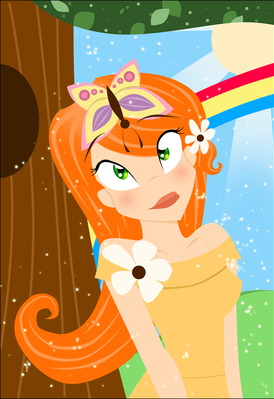 note original no longer on DeviantArt
"The crew look awesome in civvies—although this is the third time this year that Janeway has been stuck into virginal white. Are the writers trying to tell us something?"
— Doc Oho

The first Mary Sue archetype to gain wide recognition, from as early as King Arthur's Galahad of the Sangreal. Incorruptible Pure Pureness is the theme here.

A Purity Sue can be male or female without significant difference, but in all but the earliest incarnations there's a strong tendency towards the latter. It is a character that is intentionally made by the author to be overly positive. They almost never have any flaws that actually affect them in a way that truly matters, usually going for endearing traits such as "clumsiness" or naïveté, instead getting overloaded with overwhelmingly positive but largely passive traits (i.e. beauty, innocence, etc.). The character will usually be soft-spoken, have a pleasant voice, and be mild-mannered. Often, the traits verge towards the ethereal, with auras, non-human lineage, and other such things. She may be a Barrier Maiden or a Miko. And the narrative will almost always go out of its way to describe her as a virgin. Bonus points if her modesty and virginity are what set her apart from "all those other girls," and/or has no real bearing on the story or her role in it.

Like all Mary Sues, she doesn't do enough to justify the positive response. And as usual it's the writer's fault. A character who would come off as wise and pure in the hands of a better writer, motivating the main characters in their down-time, turns into a smiling ditz who manages to convince people to do the right thing just because we are informed that she is wise and pure, and somehow she is the main character. She's usually cast as a passive motivator of other people, inspiring them to strive towards the author's goals by her very presence alone. Oh, sure, she might smile, offer encouragement, write articles, and other such things, but she gets such a disproportionately positive response that it soon breaks the Willing Suspension of Disbelief.

She often overlaps with a Fixer Sue. Almost never truly overlaps with God-Mode Sue because her overwhelming righteousness is usually the focus of the story and not her objective actions. Anti-Sue, Jerk Sue and Villain Sue are all antitheses to this character type (especially the last, since she's always a protagonist). This is the type that most often shows up as a Parody Sue.

When considering if a character that overlaps with one or more of the other types belong here, keep in mind that Purity Sue pretty much exists to be loved by everybody for being (as the plot tries to suggest) "perfect" (or close enough) in every way that matters. If it's less about the character's actions and more just about everybody's fascination with the character, it belongs here. Note that merely being a Yamato Nadeshiko, Proper Lady, or The Woobie does not make one a Purity Sue.

Modern male Purity Sues are uncommon, but they're much more common in historic shows and texts. They tend to fall into four categories:

See also Mary Sue Classic, the fairly specific and extremely common plot format that uses this character type exclusively. This trope, along with that framework, is the oldest (widely accepted) form of Sue, being Older Than Steam and probably (depending on whether you believe Galahad was a Christ figure) Older Than Print.