Attack on the Heart 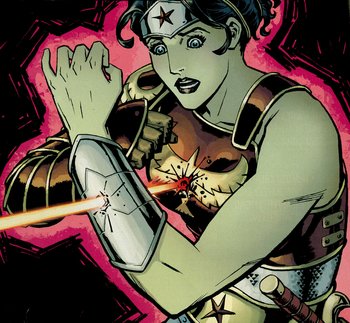 Luckily, it's only a bullet from Eros' pistols. Yeah.
Buffy: Why don't I just put a stake through her heart?
Giles: She's not a vampire.
Buffy: Yeah, well, you'd be surprised how many things that'll kill.
— Buffy the Vampire Slayer, "The Wish"
Advertisement:

) lies the heart: an extremely important muscle that happens to be the sole thing responsible for moving blood throughout the entire body. As such, causing severe enough damage to it is one of the surest ways to kill someone. In real life, police and military personnel are trained to fire at the center of mass (read: chest/heart) specifically for this reason: it incapacitates or kills a target much more consistently than aiming for extremities.

Along with throat-slitting, decapitation, and shots to the head, this is one of the classical ways of killing someone in media. Generally speaking, any character that takes a direct hit to the heart will either die instantly or drop dead after just a few seconds.

This trope can easily overlap with Impaled with Extreme Prejudice or Inertial Impalement. Vampires, which are otherwise immortal, can often be killed anyway by impaling them through the heart with a wooden stake: a depiction so common that it's a trope in its own right. If the attack actually removes the heart from the body, the victim will often see their own heart, still visibly beating before they die.

Because filmmakers aren't necessarily familiar with anatomy, on occasion a wound will treated as damaging the heart even though it's clearly not in the center of the chest. Instead, they place the wound beneath the left shoulder, where the heartbeat can be felt. That would be the aortic pulse, not the heart itself. That said, almost any penetrating wound to the thorax has a high chance of being fatal due to the number of important organs and (more significantly) major arteries and veins. The heart itself can also be affected by shock damage even if the injury itself misses, so there's some Truth in Television to this, as well.

This trope should not be confused with Shot to the Heart, which is the act of using a hypodermic needle to inject a life-saving chemical directly into someone's heart.